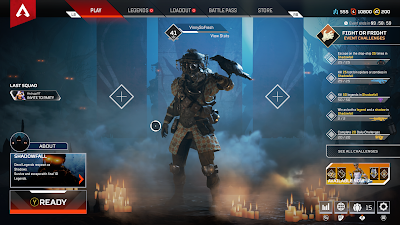 Fight or Fright was a fun event on Apex Legends. I hadn't played Apex in a long time. But, I love Halloween events on games. And, this one was good. It took me away from other games. I really wanted the rewards for this one. The challenges were fun, but very intense at times. Getting to the ship to escape had me stressing for a few days. Keep in mind, I had to relearn how to play this game. I put in time to learn what the best settings were for this game. Which helped me a lot. The shadows were no joke in Shadowfall. I got taken down so many times.

But, I achieved more than I thought. I went for the 25 escapes and got them. I guess I can get pretty obsessive with some challenges.

This is my favorite escape since I know other players had to be mad about the placement of the escape ship.

PlayStation Plus Games for June 2019

What are you playing?

Play together with Xbox Live Gold. June's 2019 Games with Gold lineup for Xbox One includes: EA SPORTS™ NHL® 19 and Rivals of Aether. For Xbox 360 owners (and through Xbox One backward compatibility), June kicks off with Portal: Still Alive, followed by Earth Defense Force 2017. June's lineup provides over $104 dollars in value and up to 3200 in gamerscore.


I'm looking forward to playing Rivals of Aether and Earth Defense Force 2017. I might try NHL 19. I'll see if I can fit it into the games I'm already playing.

Let me know what you're playing. Let's squad up.
Posted by Vinny $o Fresh at 10:01 PM No comments:

With the way things are these days in gaming, I have to say I'm an advocate for Free To Play games. And, Fortnite is the king. I'm a very casual gamer. But, I'll tell you, Fortnite battle royale used to have me stressing trying to get my first solo win. Now, that I have a few wins under my belt, I play to relax. It's so fun to squad up with friends and have a good time. Want to get competitive and have a chance at competing with the pros for some money? Jump into Arena and compete to qualify. Want to chill and respawn without having to die and go back to the lobby? Play some Team Rumble or whatever mode the Fortnite team has created for the moment.

And, it's seriously Free To Play. You don't need to spend a dime to play. You don't have to buy anything. Even then, you'll still earn some cool stuff during the season. Fortnite will have some special events where you can get extra cool rewards.

As cheap as I am, I do recommend getting the season battle pass. It's 950 V-bucks which comes to $9.50 USD. It's well worth it with the rewards you have a chance to earn throughout the season. If you're just starting, you'll have a collection in your locker in no time.

In addition to this, Fortnite is cross-platform across PC, PS4, Xbox One, Nintendo Switch, Mac, and mobile. At no charge. So, if someone is using your PC. Or, another game is being played on your console, you can simply fire up Fortnite on another device and start where you left off. I love this feature. I want all games to have it.

I'm looking forward to the new season and all the new stuff and changes that will come with it. It has been awesome to see the evolution of this game.

PlayStation Plus Free Games May 2019

As I said in the previous post, this is not a good month for free games for console players. I already have Overcooked for Xbox One. I may play some of it to get which ever trophies I can. I have been wanting to play What Remains of Edith Finch. So, that's the silver lining saving the month of May for me and having some content to share later on.

For the month of May, things are not looking good for Xbox Live Gold members and Playstation Plus members. But, let's focus on this month's Xbox Games with Gold. I'm not looking forward to playing any of these. Unless I can find a squad to play with, I'll play Marooners and see how fun it is. But, that's it for Games with Gold for May 2019.

After so many years of using SillySoul as my PlayStation name, it was finally time to change it to match the rest of my gaming and online accounts. Hey, it was a cool, fun name. I had a blog at SillySoul.com. But, then, I started FreeMixtapeLove.com and this blog VinnySoFresh.com.

And, I tell you, it's about time. Sony took forever to establish the name change feature. For whatever reason. But, I'm glad it's here. So, if you're wanting or needing to change your PlayStation name, it's free the first time and any time after that you will need to pay a fee.

So, if we're friends on PlayStation and you see new friend on there named VinnySoFresh, it's me. Connect with me online. Let's squad up.
Posted by Vinny $o Fresh at 1:53 AM No comments:

Want to Support? Buy Me A Coffee